In one version of the myth about the Greek hero Narcissus, he was punished by the Goddess of vengeance, Nemesis, who turned him into a Narcissus flower that historians associate with Narcissus poeticus. The fragrant Narcissus poeticus has also been recognized as the flower that Persephone and her companions were gathering when Hades abducted her into the Underworld, according to Hellmut Baumann in The Greek Plant World in Myth, Art, and Literature. This myth accounts for the custom of decorating graves with these flowers, which has lasted into modern times. Linnaeus, who gave the flower its name, quite possibly did so because he believed it was the one that inspired the tale of Narcissus, handed down by poets since ancient times. 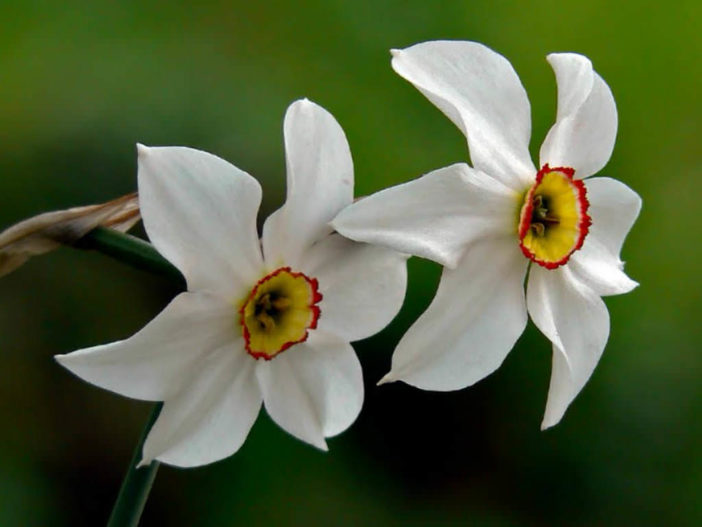 In medicine, it was described by Dioscorides in his Materia Medica as "Being laid on with Loliacean meal, & honey it draws out splinters." James Sutherland also mentioned it in his Hortus Medicus Edinburgensis.

Poet's Daffodil has long been cultivated in Europe. According to one legend, it was brought back to England from the crusades by Sir Geoffrey de Fynderne. It was still abundant in 1860 when historian Bernard Burke visited the village of Findern—where it still grows in certain gardens and has become an emblem of the village. It was introduced to America in the late 18th century when Bernard McMahon of Philadelphia offered it among his narcissus. It may be the "Sweet White Narcissus" that Peter Collinson sent John Bartram in Philadelphia, only to be told that it was already common in Pennsylvania, having spread from its introduction by early settlers. The plant has naturalized throughout the eastern half of the United States and Canada, along with some western states and provinces.