Rose: The Queen of the Flowers and Symbol of Love

The name is derived from the Latin "rosa" and the Greek "rhodon." Chloris, the goddess of flowers, crowned the rose as a queen of the flowers. Aphrodite presented a rose to her son Eros, the god of love. The rose became a symbol of love and desire. Eros gave the rose to Harpocrates, the god of silence, to induce him not to gossip about his mother's amorous indiscretions. Thus the rose also became the emblem of silence and secrecy. In the middle ages, a rose was suspended from the ceiling of a council chamber, pledging all present to secrecy, or sub rosa, "under the rose."

The first historical testimony we have of the rose dates back to ancient Mesopotamia, Sargon I, King of the Akkadians (2684-2630 B.C.), brought to UR "vines, figs and rose trees" on his way back from a military expedition beyond the River Tigris. In Homer's Iliad (ninth century B.C.), Achilles`s shield is decorated with roses. According to Herodotus, the rose was introduced to Greece by the mythical King Midas of Phrygia, who was supposed to have lived in Asia Minor about 300 B.C. Confucius wrote that during his life (551-479 B.C.), the Emperor of China already had in his library six hundred books concerning the culture of Roses. The Chinese of the fifth century B.C. extracted oil of roses from the plants grown in the Emperor's garden. It was only allowed to be used by the nobles and dignitaries of the court; if a commoner were found in possession of even the smallest amount of this oil, he was condemned to death. 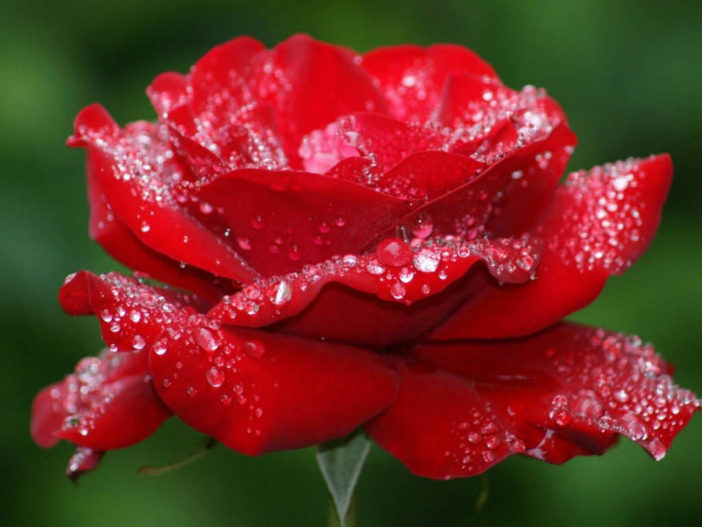 Egyptian wall paintings and objects representing roses have been found in tombs dating from the fifth century B.C. to Cleopatra`s time. Cleopatra had a passion for everything Roman, and her mania for roses was picked up from her allies. The first roses came to Rome from Greece, a few decades before her time.

During the feasts in Athens, young people of both sexes, crowned with roses, danced naked in the shadow of the temple of Hymen to symbolize the innocence of the Golden Age. During the public games, all the streets in Rome were strewn with rose petals. The Romans believed that by decorating their tombs with roses, they would appease the Manes (spirits of the dead), and the rich specified in their wills that entire rose gardens should be maintained to provide flowers for their graves.

Nero was wild about roses. During lavish dinner parties, rose petals rained down from the ceiling of the banquet hall. It is recorded that some diners, evidently intoxicated, were buried and suffocated in rose petals. The writings of Seneca and other stoic philosophers regarding the excessive use of roses were mild and bland in comparison to the angry attacks by the early Christians who saw in the rose a symbol of paganism, orgy, and lust. Tertullian wrote an entire volume against the flower, and about 202 A.D., Clement of Alexandra forbade Christians to adorn themselves with roses. It seems, however, that early Christians did not pay must attention to these warnings about roses and continued to cultivate them, even taking them to Church for various ceremonies. Slowly the Church realized it was better to absorb some aspects of paganism by changing them into Christian symbols instead of simply rejecting them altogether. In Catholic litanies, the Virgin Mary is called "Rosa Mystica," In many hymns, she is invoked as the "rose without thorns." Long before Pope Leo IX Consecrated the rose in the eleventh century, it had high status as an ornamental plant with royalty. King Childebert I had a rose garden planted for the Queen in Paris. Charlemagne ordered the cultivation of Roses in the castles where he held assemblies. After Leo IX was elected Pope in 1084, he instituted the ceremony of the Golden Rose. The Golden Rose was sent to favored monarchs as a token of papal esteem, and many of these roses are concerned masterpieces of the goldsmith's art.

Many rose varieties were lost during the years between the fall of the Roman Empire and the Muslim invasion of Europe. After the conquest of Persia in the seventh century, the Moslems developed a fondness for the rose. As their empire extended from India to Spain, many varieties of roses were reintroduced to Europe.

During the Dark Ages, roses found refuge in monasteries. It was a rule that at least one monk should be versed in botany and familiar with the medicinal and healing virtues of plants. It is recorded that on his return from the Seventh Crusade, Thibaut IV, Count of Brie and Champagne and King of Navarre (1201-1253) brought back to his wife, a gift of rose bushes from Syria. During the years that followed, the cultivation of roses was a prerogative of the French and particularly of the town of Rouen. Red Rose image

The rose became an important heraldic symbol. During the "War of the Roses," the House of York was symbolized by a white rose, the House of Lancaster by a red rose.

Empress Josephine of France started her rose collection at Malmaison in 1804. Within ten years, in 1814, her garden contained every species of rose then known. In 1829 her garden contained 2,562 different roses. The passion for roses spread from France to the British Isles, throughout western Europe to America and Australia.

The wild rose is the state flower of Iowa, North Dakota, Georgia, and New York. It is also the official flower of England.