The Story of the Rose

Every rose tells a story.

– People have been passionate about roses since the beginning of time. In fact, it is said that the floors of Cleopatra's palace were carpeted with delicate rose petals and that the wise and knowing Confucius had a 600 book library specifically on how to care for roses.

– Wherefore art thou rose? In the readings of Shakespeare, of course. He refers to roses more than 50 times throughout his writings.

– 1,000 years old. That's the age the world's oldest living rose is thought to be. Today it continues to flourish on the wall of the Hildesheim Cathedral in Germany.

– The rose is a legend in its own. The story goes that during the Roman empire, there was an incredibly beautiful maiden named Rhodanthe. Her beauty drew many zealous suitors who pursued her relentlessly. Exhausted by their pursuit, Rhodanthe was forced to take refuge from her suitors in the temple of her friend Diana. Unfortunately, Diana became jealous. And when the suitors broke down her temple gates to get near their beloved Rhodanthe, she also became angry, turning Rhodanthe into a rose and her suitors into thorns.

– A rose by any other name… according to Greek Mythology, it was Aphrodite who gave the rose its name.

– Leave it to the romantic French to be the ones first to deliver roses. In the seventeenth century, French explorer Samuel de Champlain brought the first cultivated roses to North America. 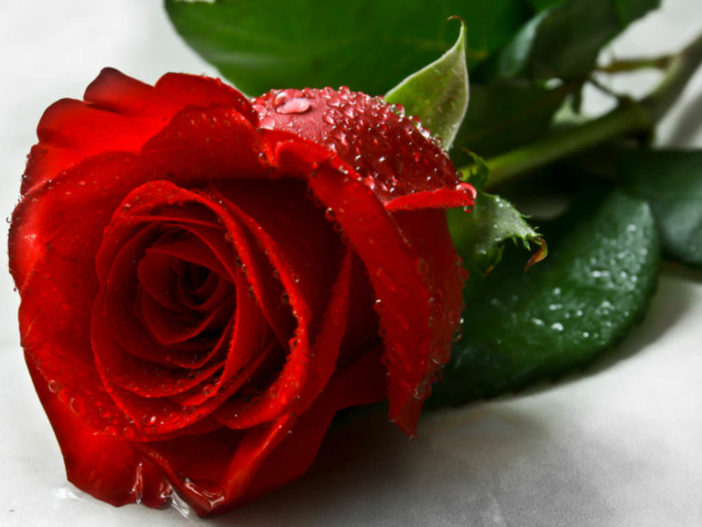 – The people of ancient Greece used roses to accessorize. On festive occasions, they would adorn themselves with garlands of roses and splash themselves with rose-scented oil.

– The first true primary red rose seen in Europe was 'Slater's Crimson China,' introduced in 1792 from China, where it grew wild in the mountains. Immediately, rose breeders began using it to hybridize red roses for cultivation. Ever since, the quest for the elusive perfect red rose has been the Holy Grail of rosarians: a fragrant, disease-resistant, long-lasting, long-stemmed, reblooming, perfectly formed rose with clear non-fading vivid red color. Absolute perfection still hasn't been attained, and of course, never will!

– Rose is the flower of love. It was created by Chloris, the Greek goddess of flowers, but of a lifeless body of a nymph which she found one day in a clearing in the woods. She asked the help of Aphrodite, the goddess of love, who gave her beauty; Dionysus, the god of wine, added nectar to give her a sweet scent, and the three Graces gave her charm, brightness, and joy. Then Zephyr, the West Wind, blew away the clouds so Apollo, the sun god, could shine and make the flower bloom. And so the Rose was born and was immediately crowned Queen of the Flowers." Quoted from Pickles, Sheila. The Language of Flowers (New York: Harmony Books, 1989).

– Clay tablets excavated in the temples of Ur in Iraq speak of the delivery of rose water intended for the sultan of Baghdad. The sultan used no fewer than 30,000 jars of rosewater a year to make his rooms smell nice for his extensive harem.

– The Saracen general Saladin sent camel caravans loaded with rose water through his empire to cleanse the mosques after 'impure' crusaders had occupied the prayer rooms.

– Until the early 19th century, dried rose petals were believed to have mysterious powers. Napoleon gave his officers bags of rose petals to boil in white wine to cure lead poisoning of bullet wounds. Even today, rose water is still used to refresh the hands before a feast or festive greeting, from the Middle East to northern India.

– There is a special rose language invented as a secret means of communication between lovers who were not allowed to express their love for one another openly in the harems of the Middle East. In the mid 18th century, Lady Mary Wortley Montagu, the British ambassador's wife in Constantinople, described this in her letters, which were published after her death. These letters inspired many books on the language of flowers, each describing the secret message hidden in each flower. A red rosebud stands for budding desire, while an open white rose asks, "WIll you love me?". An open red rose means "I'm full of love and desire," while an open yellow rose asks, "Don't you love me anymore?".