Dahlia coccinea is a flowering plant with dark leaves, up to 1 m tall. The simple flowers are red, orange, or occasionally yellow, up to 4 inches (10 cm) in diameter. Blooms from August to September. 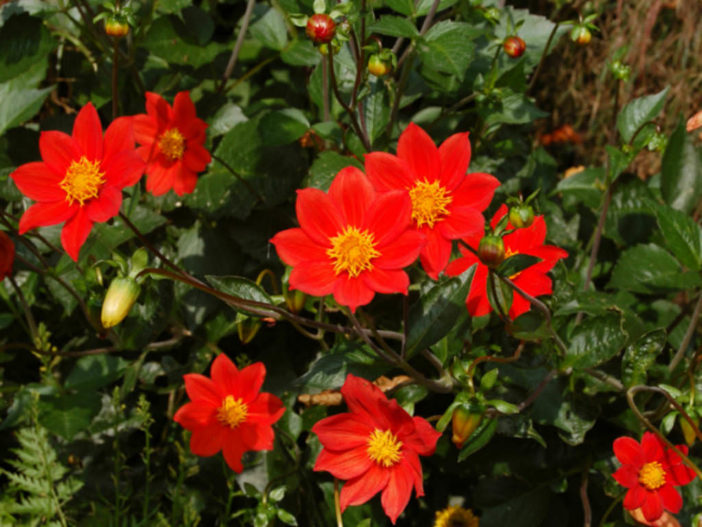 How to Grow and Care

Feed Dahlias about once a month with an organic fertilizer lower in nitrogen and higher in phosphorus and potassium, such as a 1-2-2 ratio. With enough compost, your Dahlias will do fine without fertilizer. Make sure your Dahlias get an inch of water per week. Keep track of rainfall so that the water is consistent.

Clip off spent blossoms to encourage more blooming. While optional, some gardeners remove many of the flower buds to focus the plant's energy on fewer, larger and showier blooms with long stems. The flower buds come in clusters of three. If desired, remove the two side buds and allow the middle one to grow, and keep pinching off any more side buds that form along the end of the stem.

For a more natural look, pinch back Dahlia plants when small to encourage branching. Dahlias can be divided in fall or spring. Dig up the tubers and use a sharp knife to cut into sections, making sure each section has at least one eye. Allow tubers to dry overnight before replanting.

If Dahlias are hardy in your zone, simply cut them back after the first heavy frost and apply an extra layer of mulch to protect them from the cold. Remove the extra mulch in spring. In colder climates, dig up and store the tubers in a basement or garage, then divide and replant them in the spring. See more at: How to Grow and Care for Dahlia.